History of the Island

HISTORY OF THE ISLAND: 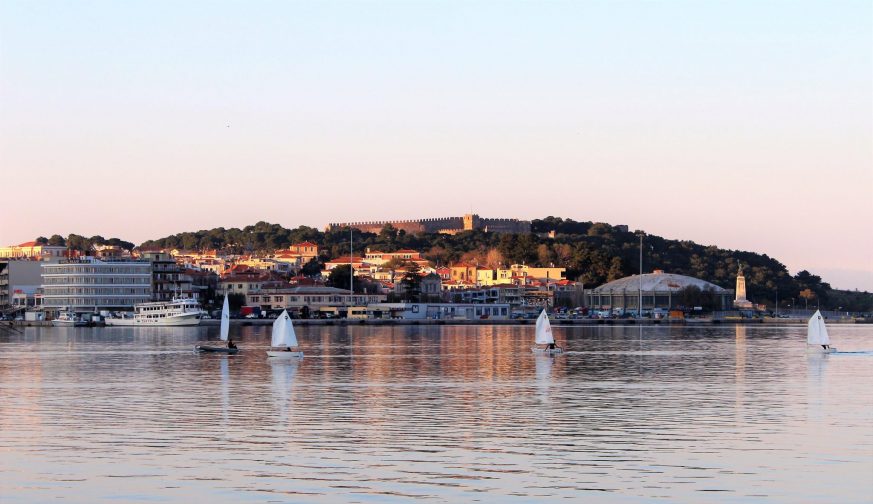 The rich archaeological findings on Lesvos (or Lesbos) show that the island was inhabited from early antiquity due to its fertile hinterland and its advantageous geographical position. The first organized communities developed about four thousand years ago and soon enough trading began with Asia Minor, other islands of the Aegean Sea and the wider Greek area. The nature and position of the island often made it a target for the powers of those times, but also contributed to the development of a particularly distinguished civilization marked by Sappho, Arion, Pittacus, Alcaeus, Terpandrus, Theophrastus, Theophanes and numerous other poets, writers and philosophers. The oleanders, ferns, pines, form the hydrobiotop of Parakoila, Skala Kallonis and the salt pans of the gulf. The area is filled with waters and their thickets of canes consist of a great number of birds, animals and lepidopteran such as foxes, winks, squirrels, hedgehogs, martens, turtles, martins, wild pigeons, thrushes, pelicans, hens-fowls, blackbirds, storks, herons, crickets and nightingales that brighten mornings and evenings with music. Alexander the Great liberated the island from the Persians only for it to later fall under the domination of the Romans. Under the Byzantine Empire, the island became a place of exile for officials who had fallen out of the Court's favour.
In 1462 Lesvos was conquered by the Turks. For many centuries, the economy of Lesvos has had close connections with the coast of Asia Minor, which due to the small distance between the two, allow thw mainland to act as hinterland, with Smyrni as the "metropolis". From the mid-19th century until the first decades of the 20th, the island experienced prosperity based on the cultivation of olive trees. 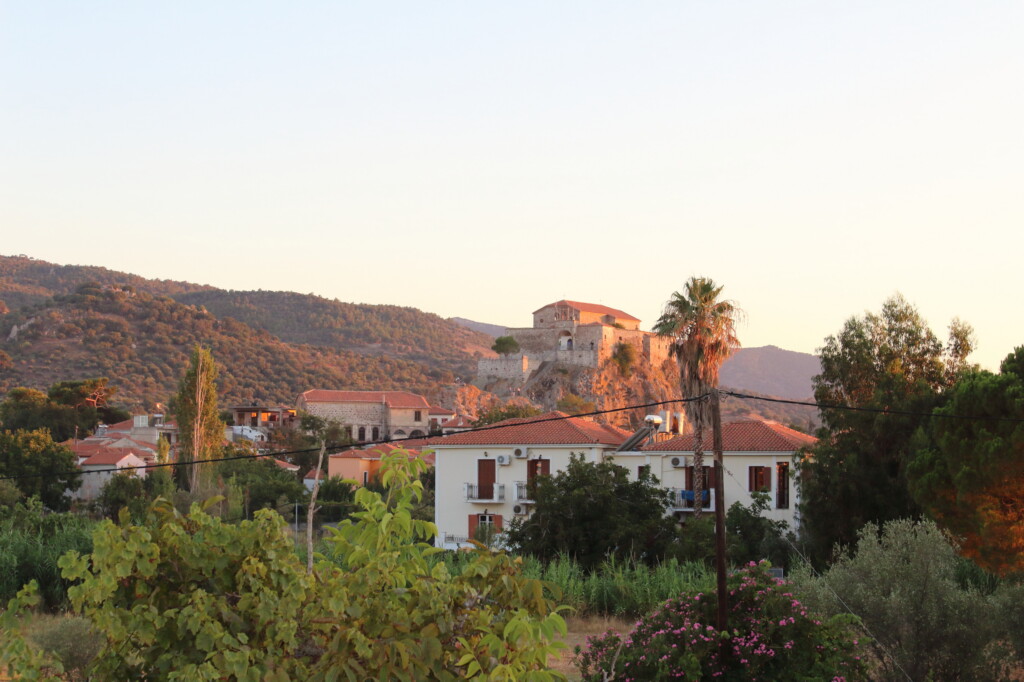 And then, at the northest point of the island one will find the picturesque village of Mithymna (also known as Molivos), with its mediaeval castle and the traditional architecture. Molivos is also the islands best known resort. After the almost total catastrophe in 1850 dye to extremely severe weather conditions, the revival of cultivation both in terms of the variaties cultivated and the area of land under cultivation marked the beginning of a new period. Manufacturing units and industries were established to process olive products and byproducts, while commercial networks were set up to transfer the local produce to the Balkans, Europe, Asia Minor, and Northern and Central Africa. The methods of standardization and processing used competed with those of the world market. Lesvos became a gateway to the East, with Western standards, a fact which left its mark on the island's culture. Buildings, churches, and luxurious residences were erected combining cultural elements from both East and West. The island became international and actively participated in the social, economic and cultural development of the times. At the end of the 19th century, considerable wealth was accumulated on the island as commerce developed. A Commercial Club was established and in the 1915 the Commercial Association of Mytilene was set up. In 1919, the Chamber of Commerce and Industry of Mytilene was established. Between 1912, the date of liberation, and the catastrophe of 1922, the island's economy gradually turned away from Asia Minor and towards Greece and its capital. In 1922 the stream of refugees dramatically changed the social and economic life of the island and a gradual shrinkage of the industrial production was observed as the huge market for local produce declined. At the same time, the arrival of refugees provided cheap manpower thus new cultivation developed and older ones improved. THE ISLAND TODAY: Since 1960, an effort to break dependence on the cultivation of olive trees has started because unstable production has led to failing populations. Instead, the focus has turned to tourism and the immediate need to develop infrastructure - hotels, roads and transport set against a background of modernization, something which became more evident after Greece's accession to the EC. Nowadays, the prefecture revolves around the processing of agricultural produce, mainly olive oil, cheese, ouzo (which is particularly profitable), wine, salted preserves as well as tourism. In recent years, great emphasis has been placed on the production of olive oil and wine using organic cultivation methods. Mytilene is the capital of the island and has a population of 30,000 people. This is about one third of the total population of the island. It is built amphitheatrically around its well preserved Byzantine Castle. Not very far from there, on the north-east side of town, one can find the Hellenistic Theatre with its superb acoustics and capacity of 10,000 people. Further in the suburb of Varia one can visit the Theophilos Museum. Only a short distance of 5 Km SW of Molivos the village of Petra can be found. Petra has one of the best sandy beaches of the island. Twelve kilometers from Mytilene, near the town of Moria, one can visit the Roman Aqueduct that was built in the second century AD. Going further up north by the east coast, thru a series of beautiful little villages one will arrive in the town of Mantamados, famous for its cheeses and the fine pottery. The next stop will be Skala Sikaminias, one of the most charming fishing villages one would ever see. And then, at the northest point of the island one will find the picturesque village of Mithymna (also known as Molivos), with its mediaeval castle and the traditional architecture. Molivos is also the islands best known resort. The association with Arts is appropriate enough, for it was here in Mithymna that the head of Orpheus is said to have been washed ashore after his dismemberment of the Thracian women. Another mythical citizen of Mithymna was the lyric poet and musician Arion. It has been said that he has been saved by the music-loving dolphin. 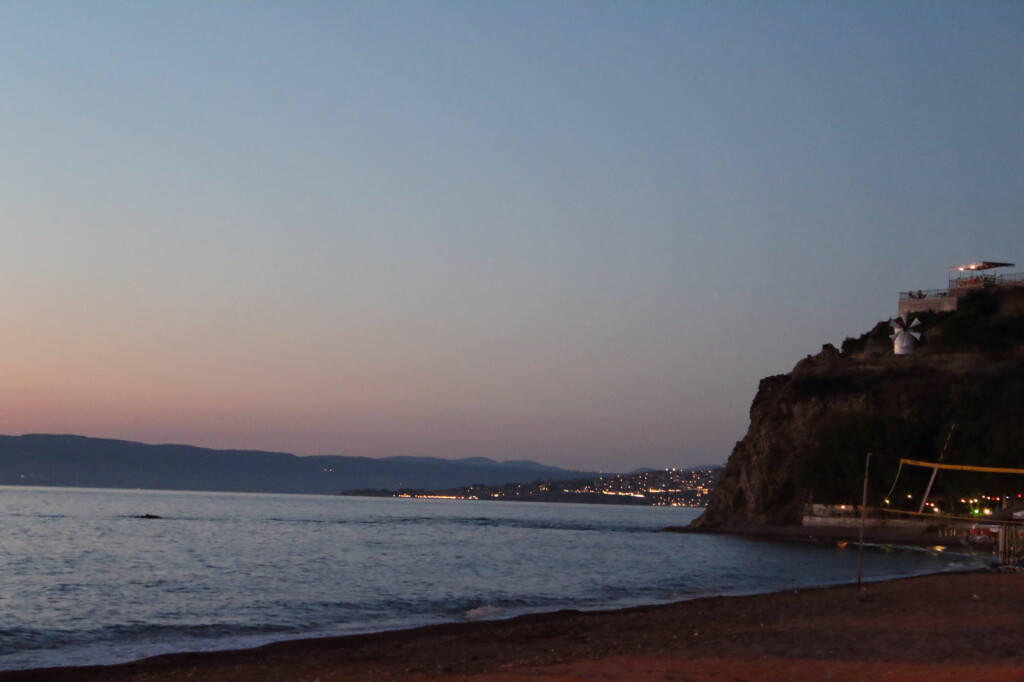